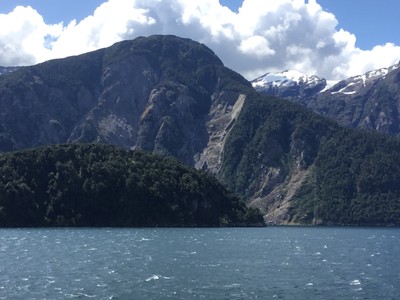 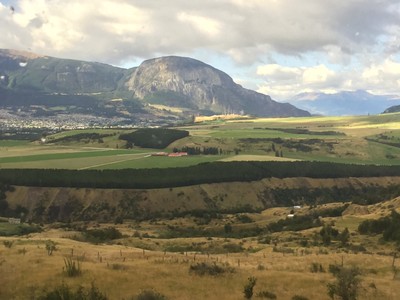 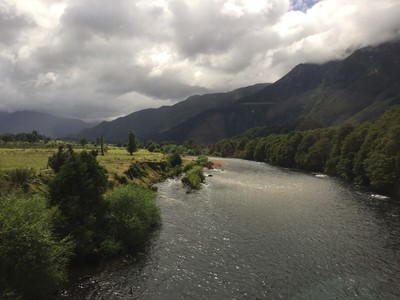 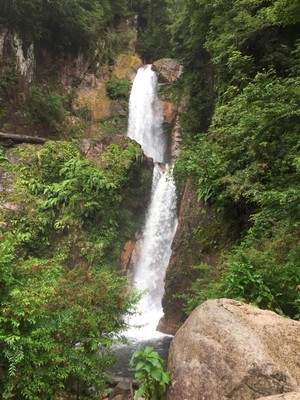 It was early on a cold wet and windy morning when we arrived at Puerto Chacabuco, on the coast of northwestern Patagonia and tendered in from the ship to board our tour bus. Our journey eastward followed the swift-flowing green waters of Rio Simpson through a steep rocky gorge, not that we could see much of that gorge because of damp rising from sodden passengers inside the bus condensing on the inside of the windows and the rain splashing on the outside made viewing anything very difficult. Up and up we travelled until suddenly we passed through a tunnel near the top of a mountain and emerged on the other side of the Andes with sunshine and blue sky. Below us in the lush green valley lay Coyhaiqué, the principal town of the Chilean province of Ayens.

The dramatic contrast in weather was repeated on the journey back to the ship. However, less rain on the western side of the Andes gave us the chance to appreciate the beauty of the Rio Simpson gorge including the cascading waters of Virgin Falls.

Photos courtesy of Doug Kline, our head usher in the ship’s worshipping community. Actually he’s the only usher, but he’s a great photographer, he shares, and our phones were out of juice.

Posted by HopeEakins 02:22 Archived in Chile

Previous Next Table of contents

Comments on this blog entry are now closed to non-Travellerspoint members. You can still leave a comment if you are a member of Travellerspoint.

If you aren't a member of Travellerspoint yet, you can join for free.